That is the comment my friend Keeley Von Spambot posted on my Facebook status when I stated I was off to check the wasp spider in my park hadn’t been squashed by a football! Wasp. Spider. Two insects that put the wind up most people. In the press recently there have been scare stories about “deadly” false widow spiders, and the killer Asian hornets poised to jump the Channel and kill all our honey bees. False widow spiders are ‘… no more dangerous than eating a peanut. But quite often alarming headlines are used to draw people in.’ Bad press invades. We have no deadly spiders in the UK. The Asian hornet scenario, though, is rather real… even Defra have put out a nationwide warning. 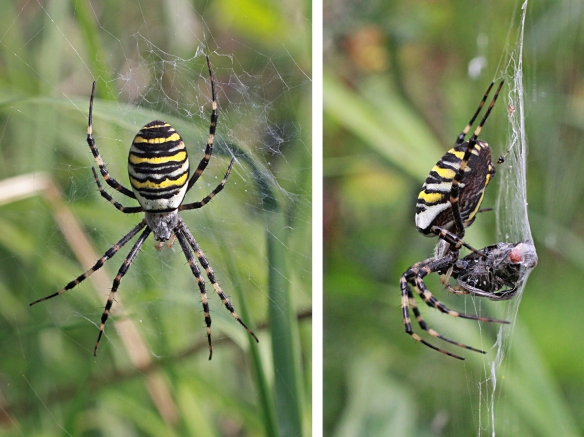 Meanwhile… in Warwick Gardens I have found a Wasp spider. One of our prettiest spiders, it arrived in the UK in the 1920s and has slowly established itself in the southern counties. This is the second time I have seen one in the park. There has been a gap of 4 years since the last sighting – hence why I am super-excited! They build large orb webs in grassland and heathland. Our wasp spider has built her web low down in the grass, stretched between a nettle stem and a leaf of green alkanet. Their distinctive web has a wide, white zig-zag strip running down the middle, known as a ‘stabilimentum‘. Mating is a dangerous game for males; they wait at the edge of the web until the female has moulted into a mature form, then take advantage of her jaws being soft and rush in to mate. However, many males still get eaten during this time. The female attaches her silk egg-sacs to the grasses.

At the weekend the local boys come out to play football in the park, dangerously near to where the wasp spider sits. I have to hover in the background trying not to draw attention to our little lady hanging tightly onto her web. I couldn’t bear her being squashed by a stray kick…