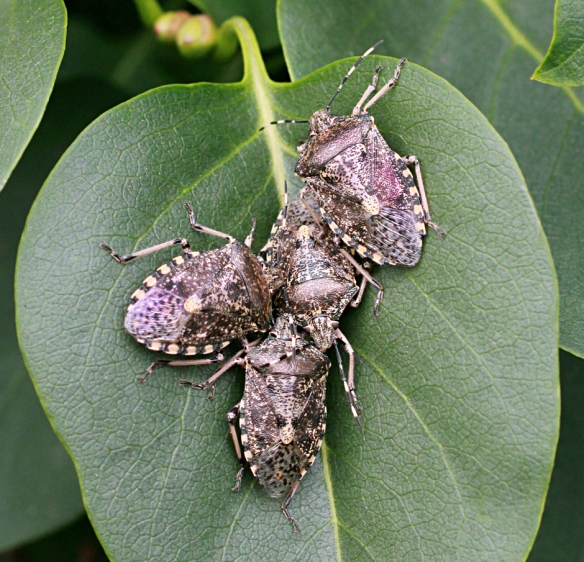 Its autumn and my Mottled shield bugs have gone into hibernation. I say ‘my’ because I have become quite attached to them! Warwick Gardens has a healthy population of these bugs – very surprising as Rhaphigaster nebulosa was only discovered in Britain from the London area in 2010. Originating from mainland Europe I am rather chuffed they choose to live in such abundance in Peckham.

They appear in summer as nymphs. My first sightings of them were in 2011, sunning themselves on a lilac bush, and every August I wait for them to appear on the same bush. Photographs don’t do them justice. Coloured a mottled bronzy-grey, with a hint of pink when the sun catches them, they are like little gleaming medals. And their banded antennae which wave around when alarmed give this shield bug added cute personality. As with all shield bugs the nymphs go through several instars before the final moult into adulthood. This year I counted 19 nymphs, mostly on the lilac but a couple had strayed to an oak tree further up the park. They have a tendency to suddenly pop out from under a leaf to bask, especially when the sun comes out after the rain. 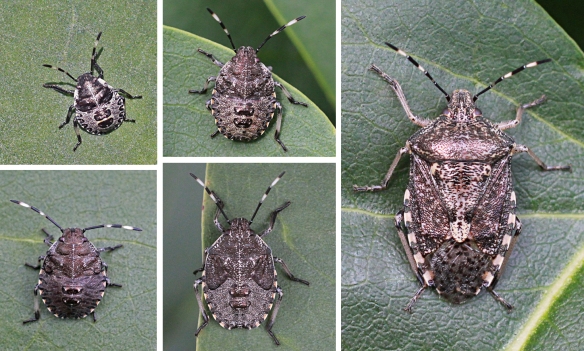 I have yet to find out on what plant they feed – on the continent they feed on the sap of deciduous trees. The only trees in the vicinity are ash, birch, oak, hazel and lilac, so the host plant is up for debate and needs more studying. Maybe we need to understand how they came to London, whether it was through the garden centre route or via the Channel Tunnel in foliage swept along the train lines, and if they have adapted to a new diet. The females lay clusters of small, barrel-shaped eggs on the undersides of leaves, so my mission next year is to look for these. For now my adult mottled shield bugs have disappeared into the undergrowth to hibernate, taking their secrets of adaption with them. I can’t wait until next August.