Yesterday there was a guy flying his remote-controlled helicopter in the park. It whizzed around making a whirring sound high above the trees. It reminded me of the drone cameras which were popular with the rallyers at this years launch of the Mongol Rally in Battersea Park, where it seemed everyone had one and were avidly flying them over the start line – a birds eye view of the 220 cars lined up ready for a mad adventure. I can’t wait to see aerial footage of the Mongolian steppes and the finish line in Ulaanbaatar. Back in Warwick Gardens the helicopter wasn’t the only thing flying around – dragonflies were showing off their spectacular aerodynamics by swooping and chasing one another around the park. 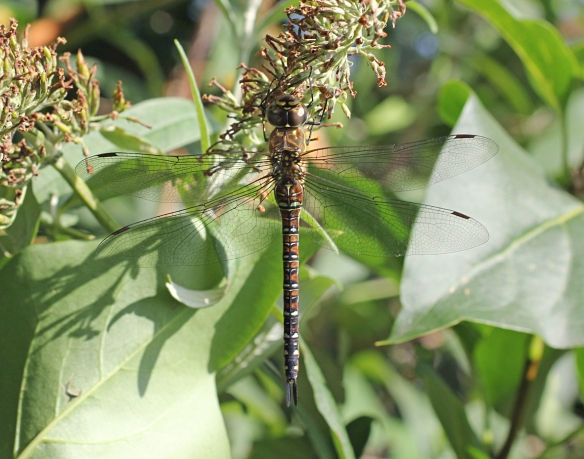 It is a good year for dragonflies as southern hawkers, migrant hawkers, a black-tailed skimmer and a broad-bodied chaser have all decided to pay a visit. I like dragonflies as they are such a prehistoric insect that has evolved into a lean, mean flying machine which can fly six ways: forwards, backwards, up and down, side to side, and hover, with an average flying speed of 22-34 mph. That is some achievement and showed up the rather weak limitations of the remote controlled helicopter which could only go up and down and forwards and backwards and somewhat slower! 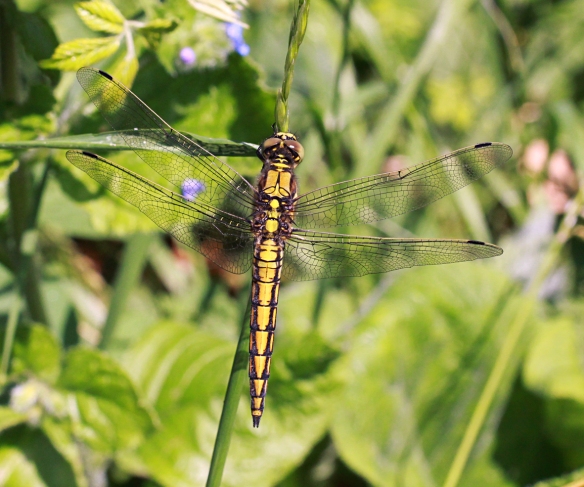 Dragonflies start their lives as nymphs in water and are ferocious predators devouring other invertebrates, tadpoles and small fish fry. They can be at the larval stage for five years but most are ready to emerge as adults after three years. When ready they crawl up a plant or reed stalk and emerge from their larval skin. The adults feed on midges and flies. 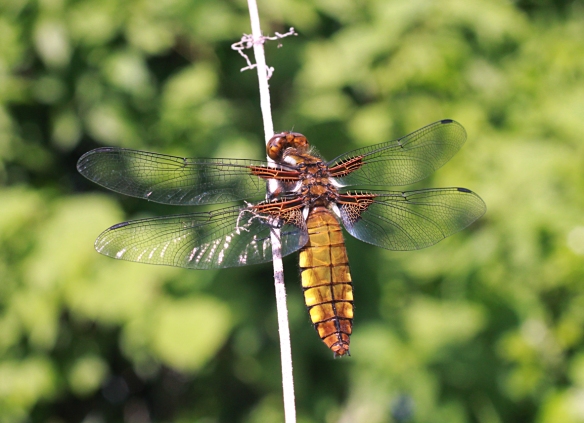 The word dragonfly has its source in the myth that dragonflies were once dragons. To the Japanese, dragonflies symbolise summer and autumn and are respected so much that the Samurai use it as a symbol of power, agility and victory. In China, people associate the dragonfly with prosperity, harmony and as a good luck charm. For Native Americans, they are sign of happiness, speed and purity. A somewhat different attitude in Europe has the dragonfly classed as a witches animal sent by Satan to cause chaos and confusion with names like Ear Cutter, Devil’s Needle, Adderbolt and Horse Stinger. In Sweden, folklore suggests that dragonflies sneak up to children who tell lies and adults who curse and scold, and stitch up their eyes, mouth, and ears. The Welsh call the dragonfly the snake’s servant and think they follow snakes and stitch up their wounds, and in Portugal be aware as they think of them as eye pokers and eye snatchers. In Peckham we prefer just to call them dragonflies or as the little boy, who was standing next to me watching them in awe, called them – little helicopters.