Its midwinter and not the best time to be out looking for insects as they are hiding away sheltered from the cold. There are a few buff-tailed bumblebees buzzing around, along with some bluebottle flies and the occasional shield bug. So I have decided to look closer to home for inspiration and photograph some of my insect ornaments.

Last year my DJ commitments took me to Venice to play at a Masked Ball – a rather fabulous experience. But it was late February and the chance of finding any insects was a bit slim, especially as the weather was rather wet. Far better to take a boat to Murano and look for glass insects instead. There was quite a selection of large realistic looking spiders with long spindly legs, comical ladybirds and caterpillars, beetles and scorpions and some rather bad renditions of bees. I really wanted a spider but transporting such a delicate object home in a suitcase full of tunes and false eyelashes was unfeasible. So I opted for a tiny glass ant.

Over the years I have amassed a collection of model insects – quite a menagerie. Some are realistic, freaking out visitors to my flat; others are much more decorative; and some are just ridiculous. Though whoever decided to make a chafer money box has to be a genius!

I pick up the occasional spider when I see one that takes my fancy. Usually spiders are fashioned out of rubber, plastic or fur fabric and sold to scare us at Halloween. I found this beautiful iron spider in a market in Vienna, next to the stall where I was buying some lederhosen. And a guy in Berlin had a whole family of computer chip spiders for sale. 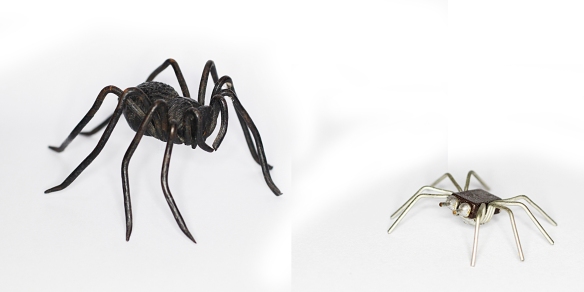 Paris proved to be the place to find realistic-looking model insects complete with a magnet to attach to fridges and the like. The spider in this collection is particularly realistic and even startles me when I catch sight of it in the kitchen. 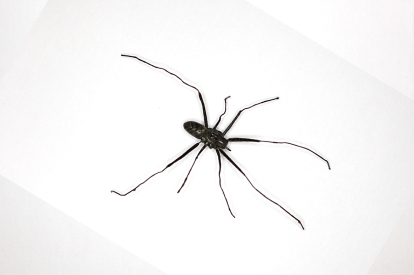 I even found a lighter disguised as a fly, and a wind-up ladybird.

My godson Ellis has made me 3 insects over the years. His first attempt at the age of five was a pipe cleaner and egg box spider with pompom eyes which sits on a bamboo web and hangs proudly in my bedroom, camouflaged against the silver birch wallpaper. This was followed by a stag beetle modelled out of clay with matchstick legs and covered in glitter which lives in a box with a few dead beetles and some foliage. But my favourite is the large ant that he made out of wire, a school art project, which he gave to me for my 50th birthday. 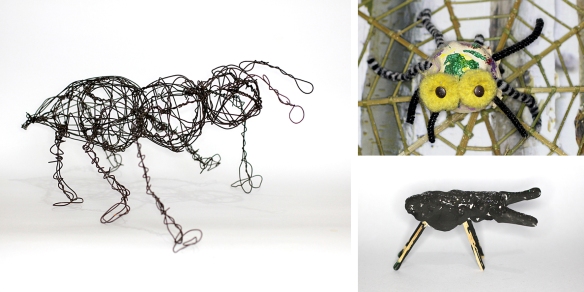 I have never been able to find a really decent model of a bumblebee. Such popular insects are usually portrayed as a yellow blob with a couple of black stripes and a smile. I am rather fussy and prefer renditions of a more realistic nature! Though I do have a couple made out of beads I am fond of. The one on a stick was a present and the other was made by a little boy in Ukraine as part of the Future Youth Project. The rather wonderful honey bee was a purchase from Cuba.

Bumblebeads and a Cuban honey bee

Another bee I really like was found at an art gallery in London. Laser cut out of aluminium this bee was part of a huge ‘garden’ of colourful aluminium flowers. Unfortunately I cannot remember the name of the artist who made them, so if anyone recognises it please get in touch and I will add a credit! 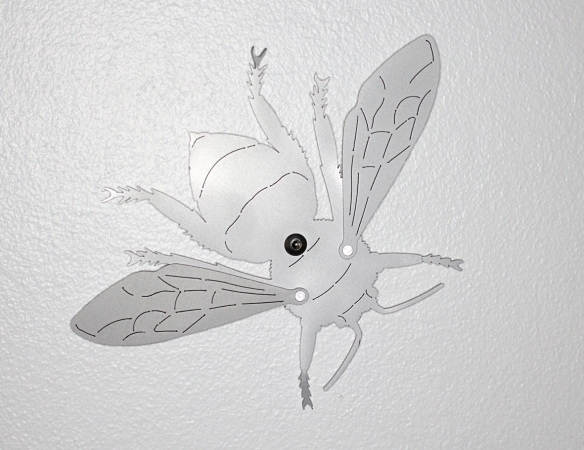 Orthoptera is represented with a superb large realistic-looking silver Roesel’s bush-cricket. And the green solar-powered crickets are fun – especially on a sunny day when they start chirruping unexpectedly. Mine sits on the window ledge behind my desk, though I had to replace it after Sputnik pounced on it and chewed it up.

This beautiful glass dragonfly came from Poland. I found it in a fusty shop selling taxidermy in Krakow, hidden amongst books and boar heads. It cleaned up well with little damage to it. Though the real challenge was to get it back to London unscathed along with the 13 bottles of Polish vodka I had also bought… well it was in the days before shoe-bombers and massive restrictions on hand luggage!

And finally there are those bugs which are not so easy to identify. A computer beetle brooch made out of keyboard pieces I bought from a guy in Romania who had a whole nest of weird and wonderful ‘alien insects’, a scorpion made from a fork which came to me via a friend, and the fly which was sold to me as a mosquito in India.

So if ever you wanted to buy me a present… 🙂