I love silver birch trees – the white peeling parchment bark, and the long flowing branches thick with catkins are like trusses of beaded hair waving in the wind. Edith Nesbit described them in her poem ‘Child’s Song In Spring‘ as: ‘The silver birch is a dainty lady, She wears a satin gown;’ Poetic indeed. They are the iconic tree of Russia, where the sap is revered as a wholesome elixir that can be taken as a spring tonic and the twigs are used as veniks in Russian banyas. Known as the tree of Venus, the silver birch symbolises love and fertility and in English folklore is said to ward off evil spirits. They are also amazing habitats for invertebrates. 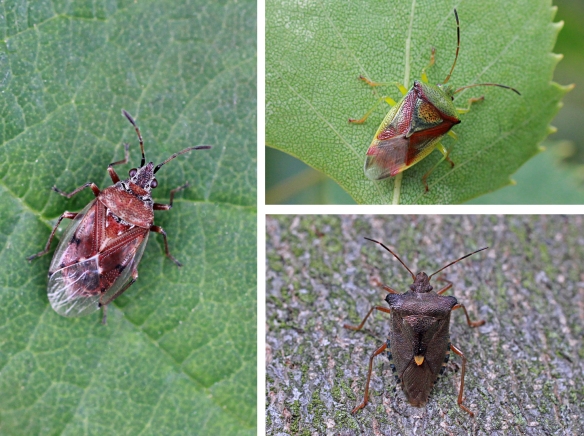 There are four silver birch trees in Warwick Gardens, standing majestically near the railway line and flanked by a hornbeam and a red horse chestnut tree. The distinctive white bark punctuated with lichen clad fissures provide an assault course for insects, complete with nooks and crannies to hide in. Ants run up and down the trunks looking for aphids, deftly sidestepping the red velvet mites, and ladybirds trundle over the bark on the long climb up to a branch junction. There are two bugs that feed on, and lend their name to, the birch tree – the Birch shield bug and the Birch catkin bug. Both are common in Warwick Gardens and can be found chilling out on the catkins or posing on a leaf. Other shield bugs which enjoy living in these trees are Parent bugs and Red-legged shield bugs.

Evidence of spiders are visible with scanty webs draped across holes in the trunk. Last year something caught my eye when I was walking past a tree – a very camouflaged spider. I just managed to take a photo before it scooted away rather quickly. I uploaded it to Flickr and within minutes had offers of identification by excited arachnologists – a Lichen running-spider Philodromus margaritatus. Now this is a rare sighting of one of these spiders – the last sighting was in the south of England. It feeds on lichen, hence the name, especially that which grows on silver birch trees. The habitat is perfect – our trees are swathed in lichen. As a migrant from Europe chances are it was swept into Peckham by a passing train. I was asked to catch a live specimen to send to the British Arachnological Society for formal identification. Unfortunately daily excursions to the park and several night-time trips clad in dark clothes and a head torch armed with a pot, I was unable to find it. So I still don’t know if we have a rare spider in the park – but I like to think it is living somewhere in the trees.

The Buff-tip moth (though yet to be seen in Warwick Gardens) is a classic example of an insect using camouflage to blend into its environment as it looks identical to a twig of the silver birch tree. The leafhopper Oncopsis flavicollis can be found amongst the leaves and another invertebrate using this tree is the Nettle weevil. So next time you pass a silver birch tree it is worth taking a few moments to look closely at it. You never know what you will find.