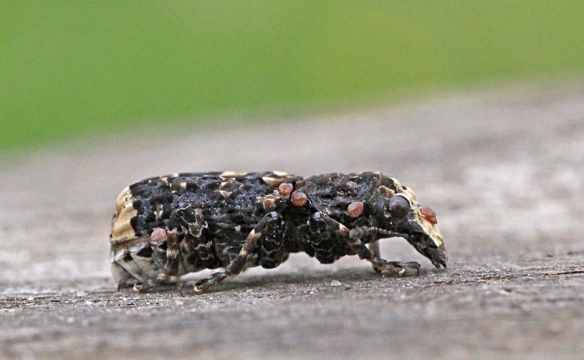 Every so often some rather interesting species appear in Warwick Gardens. I have already talked about the Mosaic leafhopper and the Mottled shield bug, but nothing quite prepared me for finding a Scarce fungus weevil. I like thumbing through guide books to insects – I have a wish list of species I’d like to see: Green tiger beetle, Mole cricket, Puss moth caterpillar and the Scarce fungus weevil which looks remarkably like a broken twig or a bird dropping. Last summer I was sitting on one of the logs munching a packet of crisps when something caught my eye. It looked like twig… and it moved. Closer inspection revealed two eyes, six legs and a short snout covered in fine hairs. It was the most unusual weevil I had ever seen, and as for looking like something else to ward off predators, a true master of disguise. 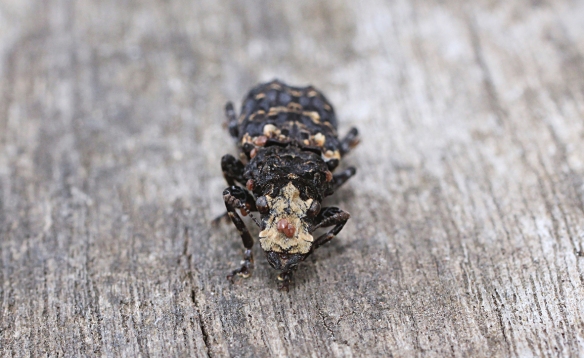 True weevils are small beetles that have a reputation as pests. Fungus weevils belong to a small group of weevils from the Anthribidae family – their antennae are not ‘elbowed’ as in true weevils and are usually larger. The larvae of the Scarce fungus weevil, or Cramp-ball fungus weevil as they are also known, develop inside the dark balls of the Cramp-ball fungus, or King Alfred’s Cakes, which grows on the dead wood from ash trees. This fungus is easily identified as it resembles burnt cakes. The adult weevil feeds on the wood around the fungus. When disturbed they tend to fold their legs in and fall to the floor, where they look just like a bird dropping. It is listed on the National Biodiversity Network’s Gateway as being ‘Nationally Scarce’ and comes under the category ‘Notable B’ which means it is uncommon in the UK. In fact there are hardly any records of it in London so all the more reason to celebrate its presence in Peckham! How it got here is a mystery – I would have expected to find it in woodland, somewhere like Sydenham Hill Wood or Nunhead Cemetery, but no records exist there either. As for possible reasons to be in Warwick Gardens – there are two ash trees in the park and one in a garden that backs onto the park. And the log seating is dead ash where there is plenty of fungus growing. I will be looking out for Cramp-balls.

The current concerns about ash dieback disease are worrying when it comes to the survival of Scarce fungus weevil. As they rely on dead ash, if the dieback continues there will eventually be no new trees and subsequently no dead wood to feed on. Symptoms of ash dieback must be reported to the Forestry Commission. You can do this here: Tree Alert